The chandeliers were made ​​using pure gold and with seven lamps, In the Bible, it is mentioned through the scripture of Exodus. The Hebrews call it the Menorah , the seven-branched candlestick, symbol of divine light, and corresponds to the sacred light of Babylon tree. For some Jewish, the menorah symbolizes the movement of the universe with the sun at its center and the planets surrounding him. Archaeologists have discovered interesting things regarding this subject. I could list all their findings, but this would give a boring text and I want to make sure I do not lose my main question.. So.. Here we go.

What caught my attention was the Roman invasion of Jerusalem and the destruction of the Temple, the menorah was taken by the invaders to Rome, some researchers argue that this holy object of Rome was taken to the basement of the Vatican, but is now under the ownership of the Vatican. The Arch of Titus is created to commemorate the conquest of Jerusalem by Emperor Titus Flavius and as you can see is an interesting detail. 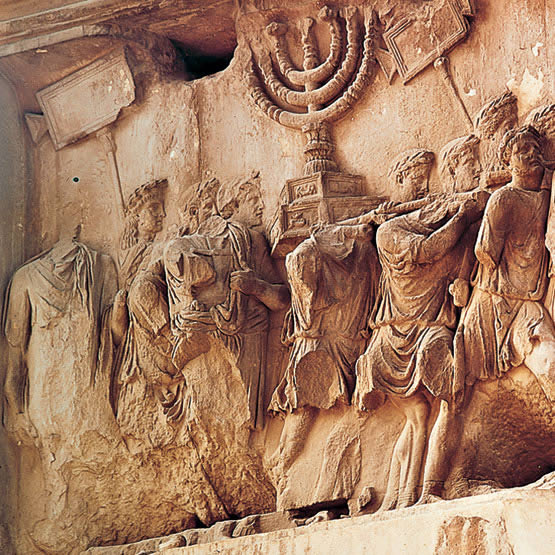 Another interesting detail that I also found was the Hanukkah. For example... The U.S. President Harry S. Truman in the Oval Office, receiving a Hanukkah Menorah as a gift from the Prime Minister of Israel, David Ben-Gurion (center). To the right is Abba Eban, the Ambassador of Israel to the United States. - Wikipedia

Both symbols have a different symbolism. Anyway, It's just me ... Or you see here a strong symbolism about Asetianism and Sethianism? What do you think?

Can you develop more on your theory? What is the Asetian and Sethian symbolism that you see?

In the Bible, in the vision of Zechariah, the angel reveals the secret of chandelier with the two olive trees that provide the oil needed to feed the nozzles Lamp Chandelier. The seven lights were the peering eyes of God throughout the land and olive trees symbolize the anointing oil which gives the spiritual concept of humand mind. Olive trees have a very strong connotation with Christianity and Judaism . In Genesis , when the flood waters had ceased and the ark still sailing on the water , Noah see the dove returned with an olive branch. The Jews used olive oil in their sacrifices and also as a divine anointing that was mixed with rare flowers. It was used, so the oil in the consecration of the priests (Exodus 29:2-23 , Leviticus 6:15-21 ) , the daily sacrifice (Exodus 29:40 ) , the purification of lepers (Leviticus 14:10-18 and 21:24-28 ) , and in addition vow of Nazarites (Numbers 6:15). When someone makes an offering to God as an offering.

I tried to find more info, but the only thing I could about the cultivation of the olive tree is that it would have been taught by Aset in Ancient Egypt, but no great detail about it. But we know that seven is the number of Aset, symbolizing immortality that is strongly connected to the Seven Daemons, The seven Scorpions and the Seven Pillars. The Arch of Triomphe was due to the Romans to build monuments to the passage of the victors. There are five existing Triumphal Arches in Rome and one of them represents the triumph of Titus. A triumphal arch is a symbol of victory in a particular battle. Each Roman triumphal arch, refers to a battle and a specific emperor in Roman history and his memory was celebrated through the construction.  As we know, is part of the Torah and Tanakh were written by Moses, a follower of Sethians. We know about Atonism and worship of Aten, and we know about the power of a War, who lost and who won. I see here a strong symbolism of the two families, Asetians and Sethians, because the chandelier is strongly developed in Tanakh directly written by Moses.

If I'm not wrong, Aphrodite gave Zeus the gift of an olive tree in some Greek myth. Connections. Connections everywhere.

In Greek myth Olivs where highly regarded, and was a gift from Athena, the goddess of war and wisdom, to the Greek People. This all began as a contest between Poseidon and Athena.
Athena Won, by giving them the olive tree, this myth is from about 3500 Bc in Crete.
Athens was named in her honer after this.

Its also an emblem for the Roman goddess Pax or Peace.

Messengers often carried a olive branch wrapped in wool to say they come in peace.

In the story of Noah ( as mentioned ) the dove came back with an olive branch, that symbolized restoration between the Humans and the Divine.

In ancient Egypt it firstly appeared (as a branch ) with the tomb of king Tut, and was also in correlation with the cult of Akhenaten.
There has been wall paintings of people holding a olive branch, under his rule.

According to my findings and knowledge the first sighting of the olive, in usage was in the ancient city of Ebla ( close to Akkedian ) about 2600 bc.
Quote : (http://www.oliveoilsyria.com/history.htm )There is an interesting thing about Ebla, is that there was a library of clay tablets that had been perfectly preserved by having been baked in the fire that destroyed the palace. The tablets that have been consolidated by fire, included one considered as the first bilingual dictionary in the world. These tablets use cuneiform script and are written in many languages.

Oh .. I totally forgot what I found in one of my books. Its a Photograph of an old Cabalistic tree.

Darn it seems I misplaced some names there. Thanks for the correction.

Glad to be of service

Thank you Jonathan :)I read over my post, and I see I have a writing error, it was suppose to say 4000 bc in Syria. Kinda got cough up in the library

However I also found this :