Numerology is undoubtedly something we have with greater ease and accesses to understand Asetianism. Over time we have seen numerous people to have an opinion about Asetianism, some insecure about what they said and felt, other firm and secure. In any case, I'll share with you a very nice detail. The Aset Ka has published three books, on the following dates:
Asetian Bible:
07.07.2007 = 7 + 7 + 9 = 23 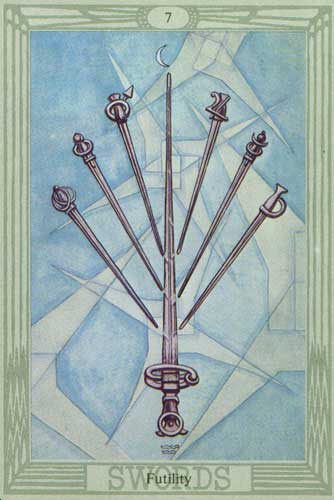 On numerical relationship of the tarot, the number 61 is attributed to the letter: Seven of spades. Personally, I really like the card in the deck of Thoth, the futility. I firmly believe that we can only evolve through the firmness of our personality and that seven is very interesting, because it's not only a seven. In the tree of Life, for example, the Seven represents the Sephiroth Netzach. The primordial sephiroth inhabit the first three Sephiroth, and they mirror themselves with the others bellow, with the elements the same thing happens, therefore, Fire to Netzach, Hod to water, air to Yesod and Earth to Malkuth. Robert Wang, in his book about Kabbalah, tells us that before dealing with the mysteries of thipareth, we need first to acquire a new form of personality, if that doesn't happen we were stagnant in Malkuth. It's like the concept of Phoenix, or even the ability to understand the difference between the Djuhuty of the crocodile and Serpent. A new mindset must arise, otherwise people will be silly in their paths. We see for example in the letter design by Lady Harris, a sword to fulfilled and others six around them. Some authors claim that these six swords are about caring the opinions of others, expectations, dogmas, among other concepts which in its entirety only hurts our existence here. The mental fragility is so large that we no longer have their own opinion and follow what others want and desire, hence the first contact with the Asetianism for all the newbies is that, knowing the opinion of others and ignore what they feel, for the most part, they lose by not understanding this path giving more meaning to useless opinions that have nothing to do with reality and themselves.

The Tower is the  number 16, well, 1 + 6 = 7. Thus, the first contact with the Asetianism, is the futility, Moon in Aquarius. When we engage in the Violet Flame, and when we follow a path where we don’t want to know what others thinks or wants for us, we are in contact with the Tower. The tower is also the first secret of the Book Of Orion, and for me this letter represents the transition of the Djehuty of the Crocodile for the Djehuty of the Serpent.
The Sephiroth Netzach represents the Victory over Malkuth and the Tower represents the "liberation", and the two letters are intimately linked, those who do not succeed in Netzach cannot be released by the tower. Another interesting detail is that the Tree of Life, the Tower connects the Hod to Netzach being again these two cards connected. All this symbolism that I just called wouldn't be possible without meditating on one of the last tweets of master Luis Marques:

Fire destroys the weak and nourishes the strong. ☥

For me this tweet symbolizes all those who are insecure, influenced by the Seven of Spades, where the flame burns all weak gone and run away from the path, and puts the strong to face the first secret of Orion, The tower.

This is just a meditative tweet that put me all this thoughts.

Another good post Kalb. You know I always enjoy reading about these conclusions you reach in your studies and personal explorations with meditation, magick and Kabbalah. You make good use of numerology and the Tarot and that is a good thing to observe in your process. Just wanted to thank you for continuing to share with us your explorations and findings even after all these years. You're one that stands strong.

Maxx: Thank's for the link you gave me in private some time ago. Look what you gave me. 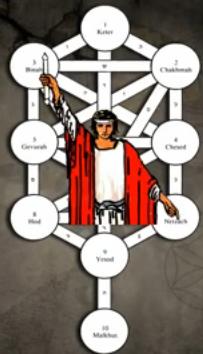 ^that video is great, along with Michael Tsarions others I've been watching today. thank you for posting that video!

The detail is more great, Demonia. It's all connect with my study around the Sigil of Orion.

Similar topics
» Victory Over Ego.
» The book of the victory over Seth