I visited a museum in the UK some time ago and found the energy of these two very eye-catching and fascinating. The first one is called "Limestone Stella dedicated to Isis" and the second is the "Oracular Judgment of Seth". I haven't done a lot of research about them but the energy was very distinctive to me and the contrast between the two very interesting. I post this for meditative purposes but also for discussion if someone happens to know more about these and is willing to share. I hope the quality of the images is good enough 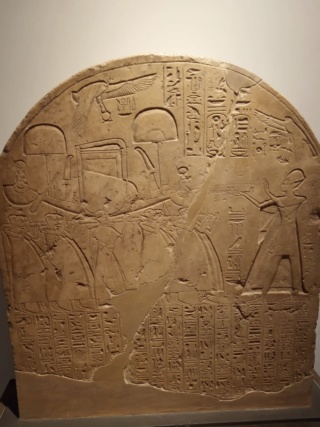 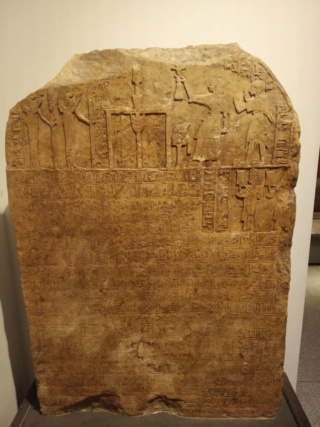 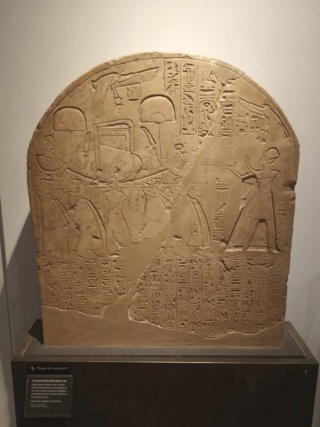 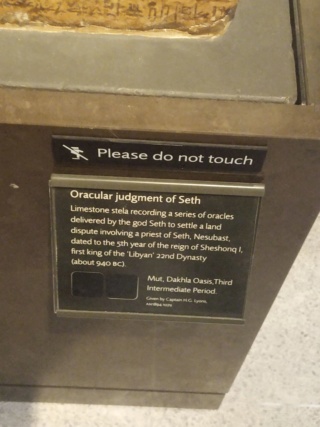 Very nice! Thanks for sharing this.

Thanks Jonathan. I am sharing better them again in better quality as I felt they were a bit small for meditation 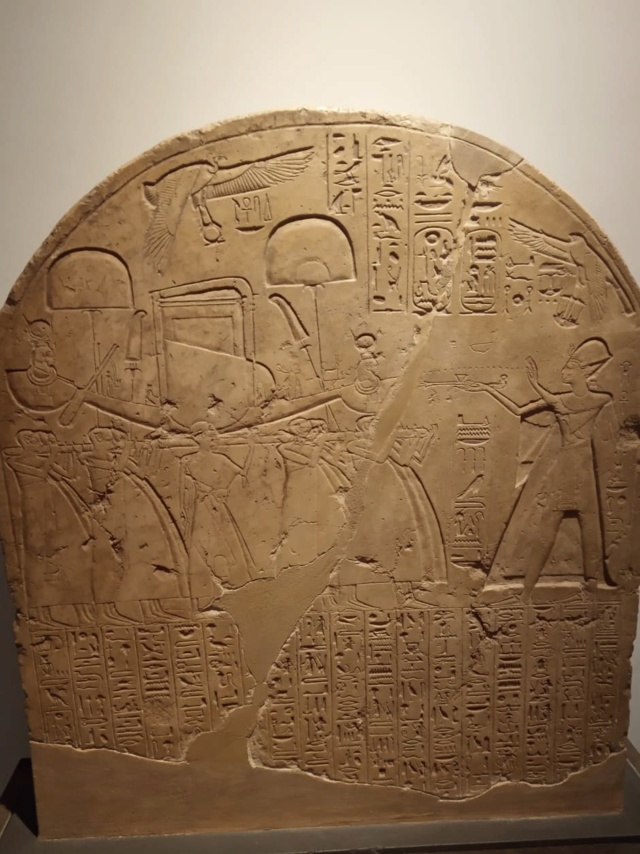 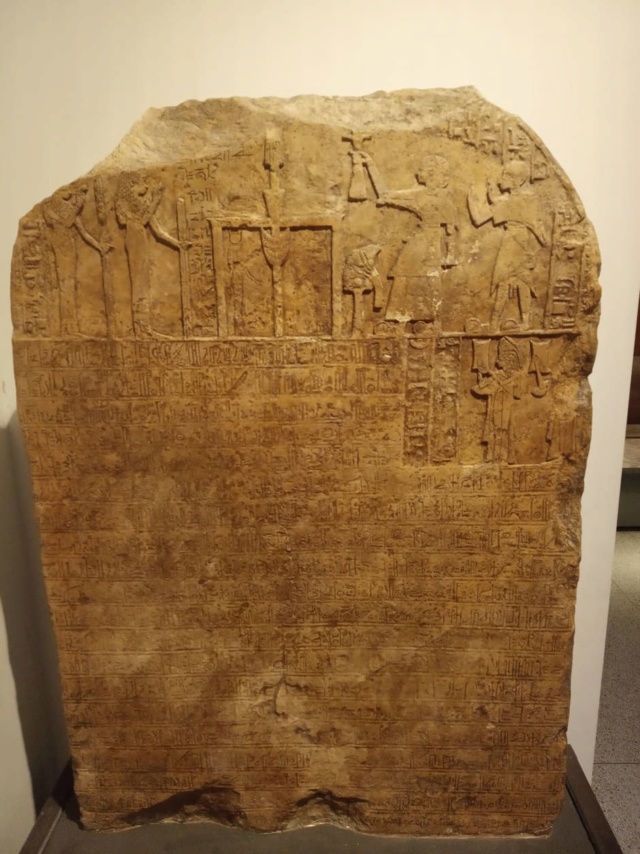 Is Seth supposed to be an Asetian Vampire? Or is something else implied here?

“The article is devoted to some aspects of the image of Seth in the oases on the example of the smaller dâkhla stela (Ashmolean museum no. 1894.107b) dating from the Third Intermediate Period (XXV Dynasty). The text of stela informs that a certain official in the oases, called Ta-bia (&A-biA), donated in a temple a daily offering of five breads in favour of his father. In this top register, on the left, is a representation of the falcon-headed god Setekh with a sun-disk on his head. In front of him are the words: %wtx aA pHty zA Nwt − «Utterance by Setekh, great of strength, the son of Nut». Seth (Setekh) is here a principal god, because he was the lord of the oases. The image of Seth on the stela is untypical - he is represented as the falcon-headed god with a sun-disk. This unusual image of Seth is associated with the evolution of his image since the New Kingdom. The closest iconographic analogy is the anthropomorphic image of Seth with a sun-disk on his head that placed on a column of temple of Heliopolis of the reign of Merneptah, the pharaoh of the XIX dynasty. This connection between Seth and sun can be explained by the existence of Set`s cult in Heliopolis. This is evidenced by a scarab of Ny-maat-ra (Ny-mAat-Ra) (Middle Kingdom) and cube statue of Hapi-ha (@apy-xa) (New Kingdom) where is mentioned the temple of Seth in Heliopolis. The image on the dâkhla stela can be considered also as the first monument where is depicted a falcon-headed Seth. Until then falcon-headed Seth was depicted only once − on the faience seal of the time of the New Kingdom, where Seth in a double crown stands paired with Horus, also crowned with a double crown. But this is not an image on the monument, but the third name-title, the so-called «Golden» name of the egyptian king. From the early dynastic period Seth was a patron of king`s power what made him a pair of Horus. Through this connection with Horus and the royal power, Seth could be given the falcon features. The final transformation of Seth into a falcon-headed god on monuments from oases take place during the XXVII dynasty. On the relief from the temple of Hibis in the oasis of Kharga (XXVII Dynasty) Seth appears with falcon`s head in a double crown and with two wings. He wields a spear against serpent Appophis. At the end of the Third intermediate period and until the Ptolemaic period Seth in oases is represented only as falconheaded god. The name of Seth is write as %(w)tx without Seth animal appears in the hieroglyphs. During the XXV Dynasty the iconography of Seth in Dakhleh underwent some changes as a result of official policy in the Nile Valley. The Seth animal no longer used, neither as a hieroglyph nor in the iconography of the god.”

Thanks for sharing Jasmine. Even though it might not be directly related to the post, it is interesting and you also provided bibliography which many fail to do, lol. Seth is a God, similar to how Aset is respectively a Goddess. In the tradition of Asetianism, Seth is a seperate deity from Aset and has his own vampiric lineage. They aren't to be confused with the Asetians, although they are also inhumane. The Asetian bible explains this much better than I am able to, of course. In addition to many other things which you might be able to gain through studying it with the right mindset. I am looking forward to hearing your thoughts after you read it.

Oh wow sorry LOL I must sounded like such a n00b

Seth and Horus are Gods Twins are they? some myths online share this

its hard to find info from academia but I am reading online for 3 days now about Egypt myths etc. and the whole website you shared with me but it seems more new thinking than Egyptian pantheon ???

I will wait to read the Asetian bible to understand more but are Asetian and Egyptian pantheon the same?
Can an Asetian worship Seth?

can an Asetian worship Horus?

From the stela itself Horus and Seth seem to be perceived as one (The Falcon symbol of Horus on Seth) so Thats why I thought it might be useful?

It's all good. You didn't say anything wrong, and it is good to ask questions. Keep in mind that the interpretation of history can be done in different ways, which lead to different pathways. What I mean is that how one person looks over history, over another, can be completely different even if the facts are the same and the history is unchanged. So someone who is both knowledgeable on academia, as well as metaphysics and Asetianism, would be more capable of making the correct associations which would sequentially lead to more things. I am sure the information about them is hidden in plain sight, and this can also be seen in the numerology and symbolism of Asetian Temples even to this day. To me, Seth and Horus are often seen like that in mythology in order to emphasize that contrast and duality, and not the other way around. You can read this older thread about your other question https://www.vampirismforum.com/t1255-asetians-and-other-dieties?highlight=can+asetians it is old, but is very informative and clarifying.

That didn’t really answer my questions but thanks for trying

If you expected a reply that would give you any of the answers directly on the plate and leave no space for you to question, I am sorry to disappoint, lol.  I am not sure you understand how the occult and metaphysical realm is supposed to work.

I was seeking scholarly answers rather than occult knowledge on them

Thanks for trying
Not to offend you