The Tao is Knowledge.

The Tao is Knowledge.

Yin and Yang are the lower angles and Tao at the top.

The Tao is Knowledge. - Asetian Manifesto. 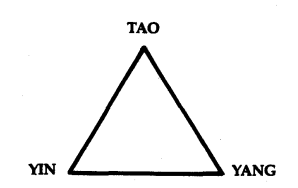 As we know three represents the cycle of evolution – Life, Death, Rebirth. Also, connected with the three stars of the Orion’s belt. Some time ago the Master @LuisMarques (Twitter) posted amazing tweet.

The Asetian Souls are like the Pyramids. They have endured the test of time and hold secrets that mankind cannot comprehend. ☥” - Twitter

The more we know about the triangle and pyramids more mysterious and interesting it becomes. Knowledge and wisdom are words that are always present in our mind. After Asetians abandoned the throne, the other cultures copied their methods and adapted things. Triangle is one. Yin-Yang-Tao: Father, Son, Holy Spirit, liberalism, conservatism middle-of-the-road, body~ mind~ spirit, Three Sacred Treasures of Japan, The Three Sacred Rivers of India , Talisman of the Three Necklace , and many others trinities and concepts. Another interesting thing is the Triangle of Manifestation.

This is a phase that indicates the principle of magical manifestation. This basic principle is rooted in the number of three. It is a metaphysical belief that in order to manifest something, three components must come together. These components are time, space, and energy. The functioning of the components is such that if a time and a space are selected into which energy is directed, a manifestation will occur.
Font: http://www.themystica.com/mystica/articles/t/triangle_of_manifestation.html

I feel that there is much to learn and discover about the number three and mysteries ... However, if you feel that the topic needs to be improved with some concepts, please. Feel free.

so I guess we are talking in 3 here

out take from Wikipedia :

There are three main galaxy morphological classifications: Ellipticals. Spirals. Lenticulars. These classes are extended for finer distinctions of appearance and to encompass irregular galaxies.

In religion and myth

As a lucky or unlucky number

Three (三, formal writing: 叁, pinyin san1, Cantonese: saam1) is considered a good number in Chinese culture because it sounds like the word "alive" (生 pinyin sheng1, Cantonese: saang1), compared to four (四, pinyin: si4, Cantonese: sei1), which sounds like the word "death" (死 pinyin si3, Cantonese: sei2).Counting to three is common in situations where a group of people wish to perform an action in synchrony: Now, on the count of three, everybody pull! Assuming the counter is proceeding at a uniform rate, the first two counts are necessary to establish the rate, but then everyone can predict when three" will come based on "one" and "two"; this is likely why three is used instead of some other number.In Vietnam, there is a superstition that considers it bad luck to take a photo with three people in it; it is professed that the person in the middle will die soon.There is another superstition that it is unlucky to take a third light, that is, to be the third person to light a cigarette from the same match or lighter. This superstition is sometimes asserted to have originated among soldiers in the trenches of the First World War when a sniper might see the first light, take aim on the second and fire on the third.The phrase "Third time's the charm" refers to the superstition that after two failures in any endeavor, a third attempt is more likely to succeed. This is also sometimes seen in reverse, as in "third man [to do something, presumably forbidden] gets caught".Luck, especially bad luck, is often said to "come in threes".[3]

Flag of Trinacria with a three-legged symbol.

Nice post. The magical number is present in every fundaments of the Universe.

I do not see the Tao in this triangular fashion at all. The Tao is beyond dualism. It is written:
"The Master keeps her mind
always at one with the Tao;
that is what gives her her radiance.
The Tao is ungraspable.
How can her mind be at one with it?
Because she doesn't cling to ideas.
The Tao is dark and unfathomable.
How can it make her radiant?
Because she lets it.
Since before time and space were,
the Tao is.
It is beyond is and is not.
How do I know this is true?
I look inside myself and see."
Ch. 21 of the Tao-Te-Ching

Yin and Yang are aspects that stems from the infinite-nothingness to manifestation......in my opinion anyway. However, the Tao is knowledge is indeed true.

Understanding is Yin, Wisdom is Yang. Tao is Knowledge.

This mystery is best understood by the Book of Orion, specifically by Liber Sigillum 333.

That's like the trinity from the liberal perspective. How interesting and vicious a distinction from the open analysis, political is the Christian. TAO literally means way, but by info it's linked to the Jewish KA, the Japanese Kami, The Holy-ghost, Wicca, etc. I hate to be in a frontier by spiritual demands.

Trinity from a liberal perspective? You mean a "Catholic" (Catholic means universal and that's ironic) Christian perspective? I don't think they're very liberal, though, but very traditionalist in an often authoritarian and far-right way (or at least they used to be), if we're to go into the political dimensions of framing human societies and traditions by means of their own customs.

If that's what you meant... perhaps... The "Holy Trinity" in Catholicism is indeed purported to be a kind of transcendental fusion of essences and persons into a single unit (one might wonder where they got those notions from in the first place, though) that's called as "God" but divided between "God the Father", "God the Son" and "God the Holy Spirit". Obviously, however, not even all Christians agree with that notion. The Jews, too, from which Christianity originates, would call the concept a very tricky and quite false one as they're strict monotheists and dividing God between different persons, to them, would be akin to idolatry or blasphemy. Now I don't concern about any of that as I'm neither a Christian, Jew nor monotheist at all, but explaining their perspective might be interesting.

Albeit I wouldn't call them - this trinity described by Kalb and the Catholic trinity - necessarily that similar. The difference is quite stark in some way. I think the Christian trinity very much is a kind of vertical trinitarian construct, realistically speaking in how that model is applied theologically and cosmologically by them in their view of reality, being the Holy Spirit a form of animating or operating principle, and the Son or Logos a kind of intermediary between that and God the Father, who - the very latter - would be the transcendent absolute deity, according to them.

Whereas, here, the trinity that was described by Kalb is of a very different sort, seeing as Yin and Yang, first of all, are on a horizontal - and not vertical - line of parallel with each other, and the Tao, then, ineffably transcending that duality but at the same time reconciling them both into a third point of neutral observation or triality, whether that third point is actually a third point at all, then of explication from duality into triality, or a withdrawal of duality into an implicate oneness prior to the emergence of that duality. That's an interesting question of a detail for a few topics here that holds potential to understanding a few mysteries once that question is solved, I think.