The following is a small section from certain private research documents of mine dating to the beginning of this month.
First please note that some things have been deliberately written so as to respect privacy and sincere Occultism.
Those familiar with Grant Will find this far more approachable incidentally, and other Asetianist Will then find this post equally easy to understand.

It dawns on me now an excerpt from Luis Marques of Aset Ka, on the nature of the Divine Realm . . .

"The divine is the superior and most inaccessible of all the planes of existence. It is the All, the One and the Infinite. This is the Root Realm, and its complete understanding is beyond what the human mind can conceive in their material, physical mind. It is the last layer of the subtle reality, the one that enters deeply into the realms of the Duat - the land of the Gods. No incarnated beings are allowed there, so no one can actually project into it."


It serves caution here to apply careful logic in the transcription of these words, their separations, interpretable altitudes and comprehensions meant to be accessed from differing perspectives. I take here the notation of "no incarnated beings" to mean not the Divine, but the Duat (the differentiation of none being allowed "there" comparative to the function of "here" in response to his prior sentence). Much to the veracity of this topic is of course intentionally shrouded by platitudes, ruminations and the stories of dead adventurers, though the metaphysical information exists there always for the ample inquisitive student.


I noticed also a quote of interest in the Violet Throne, from Liber Aeternus III . . .

"They were only three.

Yet, they moved a nation.

They were only Seven.

Yet, they conquered the desert.

Yet, they were forgotten.

Then, they were remembered."


Beyond the concise understanding of Aset's Seven Demons' crucible of Egypt, might this Desert also be an allusion to the Divine / Mauve ? (Added now, as of making this post: This will be relevant a little further down, but Note here the usage of "Root Realm" —  contextually relative to the Was Sceptre, which is symbolic of Sethian connotation found of the Root Shen. Also sharing in blatant given qualities of that aforementioned zone.) of course additionally the Gnosis that without apt grounding any journey to Divine becomes fruitless. The provided context makes this, quite humorously, impermeable, given that Grant describes the locale as a dry dead desert of Set(ref) filled of Vampirically-drained denizens of egoidal creation. Lateral if inconclusive thinking offers that Grant makes found here the Typhonian, i.e Sethian,  P.O.V of this realm, given that just previously he mentions..

"(Grant)The letters M and N comport predominantly negative concepts. M is represented by the wave of water, as exemplified in the astroglyph for Aquarius: the undulation of the reptilian or ophidian current employed by terrestrial adepts. N represents the absolute negation that obtains beyond the Abyss. The difference between the two sets of symbolism is paralleled by the difference between the Hanged Man of the Tarot, the One who makes the Crossing,94 and the Crossing itself. In terms of Liber AL, N represents the Ordeal X, which is the Ordeal of the Crossing. The orthodox letter stood for the white vulture of Neith; its Typhonian equivalent was the black bird of Set whose symbol was the Tau which typified the nine dry months. On the other hand, M typified the waters of the three months’ inundation."

... directly acknowledging the parallel, as Neith is a known, highly-regarded Asetian warrior. Anything but Typhonian.  Further evidence to be found in The Ninth Arch p.36  here on the topic of the "OKBISh" (Book of the Spider) he clarifies the magicians' usage of imagery to facilitate a framework for inner understanding of celestial realms. In the lodge's interpretation there is found the acknowledgement of the Asetians-- "The Children of Isis appear, and like birds - but such indescribable birds - (winged) disappear. We who have seen them; know of one only description of their appearance in the writings of earth.


⦁ Reference ("Outer Gateways"):
The dry land is the desert, the empty or deserted land, the terrain of Set; the only shapes there are the mauve shadows cast by sloughed thought-forms that linger as shells bereft of true vitality and reason. There is here no flesh, merely the wraiths of egoidal or personal consciousness. The vulture reigns in this realm, as the bloodless shells testify. Hence the bird is symbolic of ‘Victory’, the title of the seventh sephira, Netzach, typified by the Raven or blackbird of Set. The denizens of this desert are drained of blood, hence the vampire-type as Lord of the Mauve Zone. The vulture as the type of the Mother (Typhon), the dog as the type of the Son (Set), resume again the symbolism of the Woman and her dog, a symbolism that has descended to the present day. In a Thelemic context, the Nahsi are the ‘dogs of Reason’,96 for reason is typified by Daäth, beyond which the human intellect cannot penetrate. The Mauve Zone marks, on its terrestrial side, the limits of the rational.

What are your thoughts regarding this take?

I am in the middle of running to town and then playing Jons game and also doing 24 hours of continuing education requirements with financial requirements. Having a great day and keeping busy......

But I did read your info this morning regarding Seth material and I am keeping that in the back of my mind and seeing enriching scenery while thinking on Ken Grant. I will say that certainly lines up with some things I have seen from the very early days of Narmer.

My question back is why do you think some individuals see the other side as being so involved and dark and dreary and foreboding while others see it as light and joy and relaxing?

Personally, I do not feel that passing over into the next realm is going to find all those difficult choices and selections and directions and difficult decisions one needs to confront.  I believe most of it is done here before leaving.

The mauve you mentioned may well involve the dark desert already filled with bloodless creatures, etc, but where did that concept first originate and is it still as relevant today as the first time it was conceived?  We spoke a little of K. Grant.  I respect his accomplishments but I wonder how he is doing toady, since 2011.  I wonder how "The Beast" is doing in the new dwelling, etc?  Also, how have things changed from how they view things at this time?    Many more but just was curious with your thoughts on relation to the past with the present and if you see a permanent change in each life in progressive form or do we stay in a static thought process?

It is always interesting to listen to other people's perspectives on the same subject if they are capable of having a knowledge of the subject, ... and I feel you do.

My question back is why do you think some individuals see the other side as being so involved and dark and dreary and foreboding while others see it as light and joy and relaxing?

Fortunately, Bertrand Russell explained my thoughts about 68 years ago. 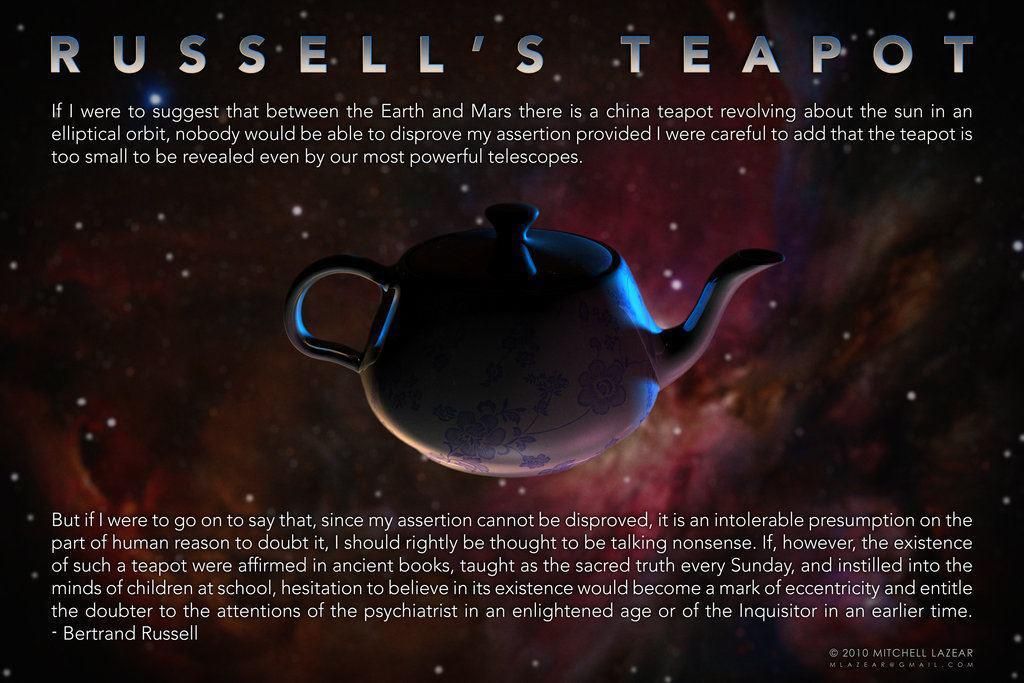 I spent a time writing up a lengthy post cross-examining the fallacious nature of Modern Christianity and then felt a bit silly, really, because it'd just never end. The greater I'd explain my point the more incomprehensible and jargon-filled it became, and so the more I would need to then clarify, which would be incomplete, so I'd extend usage of terminology, and then ... etc.

I'll keep this concise: Logical fallacies of the credulous and wilfully ignorant.

Most People usually define their unfounded conception of an afterlife by their own lack of achievement in their lives, their unmet expectations. *Note that these are both egoic principles.  That probably explains the promised objectivity in the term— "after"-life.

See further: Questionable cause fallacy and Christianity's beliefs on the afterlife.


Also, Grant's beliefs are substantiated by accounts of experience. That's the difference. It negates the ego-perspective and relies on actualised, reproducible spiritual encounters capable of being studied.

Similar topics
» Asetians and Sexuality
» Those studying K. Grant Material and OTO
» Asetians and Minerals
» Question concerning Asetians
» Why are the Asetians Important?