Hieroglyphic of Ra and Osiris.

Hieroglyphic of Ra and Osiris.

Stumbled upon this and some explanation provided on this website. Read it, view the hieroglyphic and let me know what you think. I found it very enlightening with an Asetianist mind-set. 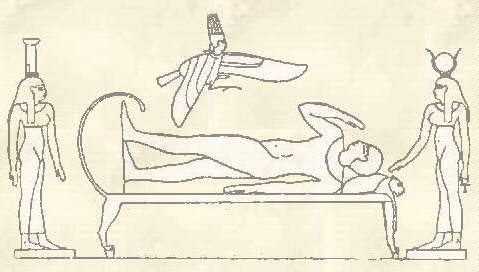 "From
the Pyramid texts of the Sixth Dynasty (which contain much older
religious beliefs...) it becomes clear that the pyramid was not
just a tomb, but that it had evolved into the site of a mystery
that allowed the dead king to unite with the ba of the sun god."-Dieter
Arnold"

Hm, I do not think that is Ra... Correct me if I'm wrong though. I do not know how to read hieroglyphs quite yet, only beginning to learn.

But it would appear from this image that Aset is being helped by the deity on the left, Aset is desiring the life to return to Asar, holding the Ankh in one hand and placing her hand over the lion's head which Asar's head is resting. Asar is looking at his hand, likely his spirit returned temporarily, depicted by himself as a spirit-bird entity. It's hard to tell whether he has his genitalia, it is written in many places that Aset never recovered them. However, even if he does not have them, and it is depicted as such (though possibly they eroded away), his spirit still bears life-giving potential, depicted by the erect penis on the bird-Asar.

At least that's how I see it.

JWG, I tend to concure with Jonathan, although certainly will defer to the real Egyptologists on the forum. I cannot confirm the identity of the Ba bird.

The deity on the left is Nepthys, sister of Aset and sister/wife of Set. I would expect to see both Aset and Nepthys at the resurrection of Osiris.

I am confused by your reference to the Sixth Dynasty Pyramid Texts. The picture posted clearly shows a New Kingdom Isis,after the syncretic merging with Hathor, as evidenced by the solar disk and horns versus an older Aset, who would have been shown with the throne gylph on her head. There were many differences between Old Kingdom and New Kingdom religious interpretions. Just curious as to your thoughts.

Similar topics
» 'st hieroglyphic
» The Body of Osiris
» Reverence for Osiris?
» Osiris, ruler of the Duat
» 21 Pylons of the House of Osiris