Seriously, I remember back years ago I checked into this motel room in Mississippi..I failed to cleanse the room of everything in the spirit world like I always do........cause I was in a hurry to turn on the tv to see some baseball or football game I was listening to on the car radio.....the tv was on a stand up on the air and so I walked over and I stood under it to reach up to change the channel......when I did the spirit world opened up for me and I saw a spirit there and I moved forward and touced it.....at that point it realized that I could see it and I moved into its realm and i heard a loud scream and it went backwards out the side of the wall getting away from me.......shortly the motel phone rang and the desk clerk was asking was I OK as she had heard a loud scram coming from the room ..... LOL.......You know you are ugly when Uncle Fester screams....I am so ugly I frighten the demons......and i have a hundred stories I can tell like that.....all true...... 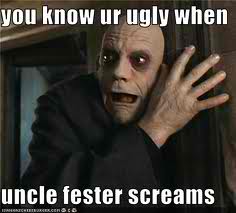 Lol... I think this thread should stick around if nothing more than for the comedic relief... ;p

It should probably be moved to the Off Topic though. This section should be kept clean and focused I think.

Uncle Fester.... You forgot of our long discussion in Paris in 1880?

Hope with this clarification you do not feel offended when I call you gay.

You guys are insane!

Just kidding, we are all crazy in our own little way.

But I belong to the union...mine is organized, unlike Gomez.

and by the way......i am a licensed Insurance agent......I can perform Hillbilly weddings.

Maybe we can ask him for some money too.

I have put these simbol here just knowing that you would fall for this.

It's not ''MONEY'' it's THE SERPENT FROM KEMET

But all you can SEE is what you were PROGRAMMED TO SEE in this fucked up reality!!!

Then you come here to talk SHIT about the humans and HOW THEY SEE the reality DIFFERENT than you!!

REALLY? YOU GUYS ARE BEING SERIOUS?

They see like mortals. But if they are mortals, you are more mortals than the humans you talk about here. Still believing in BREATHING, EATING, MONEY AND DRINKING WATER.

Is these a real forum about vampires?

You must be kidding me...

Money is the enslavement of humanity and the '' IMPERIUM '' of a little few, which you don't even have an idea of WHO they are...

PAPER WITH NO REAL VALEU, WHO THE HUMANS CAN USE TO WASH THEIR DIRTY BUTTS

THAT'S WHAT MONEY REALLY IS.

So if you want to show some respect to me, don't even use these WORD again: MONEY.

This just show me how lacking knowledge you really are!
And also, don't even think too, that gods are

LIGHT BEINGS full of love in their hearts and that they HAVE to treat each and every one with respect and this or THAT...

Gods have no RULES to follow, and their sons too. they create the rules OR REMOVE THEM as they wish.

And in fact, things will gonna happen here on GEB because you are DESTROYING earth(geb) and the earth is ANGRY with these motherfuckers making BUILDINGS, killing animals, removing FRUITS and FOOD from the trees to EAT, making SHIT and PISSING ALL AROUND and using psychotronic devices to control climate and make coward storms where they want


So there will be a IMPERIAL DESTRUCTION on earth soon and the VIPERINES WILL RULE THE EARTH SOON. This will be the reign of the SERPENT again where REAL MAGICK will gonna happen!

So as regarding the gods:

But here, i'm representing CHAOS, i'm not here to use fancy words or talk beautiful things about love to you

Remember, FIRST before everything you can EVEN IMAGINE about how the world should be and how a real god should behave in your dirty little minds

Just remember that FIRST there was CHAOS, and ONLY CHAOS

You should know these as you have read your beautiful ''Asetian Bible'' you talk so much round here.

Everything GOES BACK TO CHAOS, and came through CAOS.

So caos, has nothing to do with beautiful words, and this topic here, were open, just to bring some chaos for this little community.

Because you guys have been and STILL continue to talk SHIT here.

My job is done.
Nothing more to say.

I think we need to hold an intervention for this fellow..

By the way, you said in your previous post that you were done with us here and had said all you had to say.

But if you are corageous enough, my advice would be to do something to yourself and use all this energy to take a humble stand and try to find your path. It's not that difficult to look inside yourself.

May the $erpent be with you.

sonfoisis wrote:So if you want to show some respect to me, don't even use these WORD again: MONEY.

It is curious, you do not showed any respect for any of us and still want it. We have earned the respect of others with time and wisdom. You're not putting any Chaos here, just stupidity and selfishness and of course, you do not teach us about love here. It is obviously not. Love exists only in the absence of Ego and you made question proving us that you are very egocentric. This point is solved with you.

Now, Asetian Bible could be published by a publishing house that could make it big marketing, and pay a fortune ... But the Aset Ka publish at their expense, and this was very hard to get, the costs was immense. Asetian Bible, It was and Is a book that caused a lot of inspiration from the world, created a Chaos in many minds and opened doors for many. Unlike you, with a large of stupidity and ignorance decided to write nonsense here in a "little forum" and try to change our minds when Asetian Bible changed the world. The Asetians have the courage to speak like us, giving examples of how to do and how to love ...

Each of us, Have a path full of sorrows and joys, we won every battle and we got to where we were with our merit. We share our ideas and experiences, you criticize us, but you did the same.. Wanted to share your beliefs with us.

Finally, Asetianism not mess with our brain, it is with our hearts.

N.Augusta wrote:Goodness gracious, some people have way too much time on their hands. I had an enlightening evening in class. We are going over Liber Aba and discussed the "sword" and the "pantacle" various areas on the tree, and paths on the tree, and, of course, Crowley. Gosh, thank you-- you just made me appreciate my enlightening night all the more.

Yeap yeap, Victor. I have my big blue brick classes and also Kabbalah classes with them. Good times!

It's a very good book. Not a book actually, but you get the point...

It is, yeah I do. I was fortunate to have a friend give one to me for me to keep. It is huge!

A little off topic, but I find it quite funny that 10 (rather small) paragraphs follow after sonofisis claims to be done talking.

sonofisis wrote:The message is left, i have done my job.
As for you mortals, i have nothing to say.

You are just doing what you are good doing since the beggining of times:

Wow. I take a offence... Hey, Mister super special vampire man? Would you be provoked if I said 'put your money where your mouth is?' Oh. Wait. I don't care whether or not you're being provoked... Let's assume I'm saying it anyway...

He has been banned, I believe.