Some time ago i study a Christian Bible and.. I find some thing that make me more interest. I will share with you 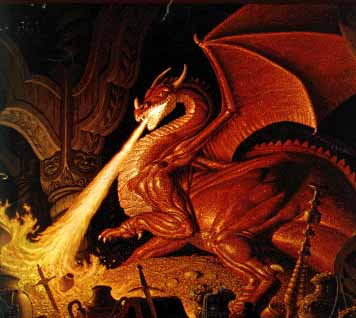 Question: "What does the Bible say about dragons?"

He seized the dragon, that ancient serpent, who is the devil, or Satan, and bound him for a thousand years.” The Bible is not teaching that dragons ever truly existed. Rather, it is only comparing Satan to a fire-breathing monster.

"And there appeared another wonder in heaven; and behold a great red dragon, having seven heads and ten horns, and seven crowns upon his heads." (Revelation 12:3)

"And they worshipped the dragon which gave power unto the
beast..." (Revelation 13:4)

"And he laid hold on the dragon, that old serpent, which is the
Devil, and Satan, and bound him a thousand years." (Revelation 20:2)

What do you think about Dragon? Symbolize anything? The Dragon is really interesting.. Let me explain you the Symbolism of Dragon.

The
symbolism of the dragon is associated with evil and terror, but at the
same time also symbolizes the protection of the treasures. Fight and
win the dragon expresses the initiation and evolution through the
ordeal. This mythological animal is also a symbol of immortality, the
union of opposites and of divine power.

In the mythology of many traditions, the dragon is the guardian of
hidden treasures that must win to have access to them. In the mythology
of the West, the dragon protects the Garden of the Hesperides who
guard the Golden Fleece and has the treasure of immortality in the
Germanic myth of Siegfried.

In the Bible, the dragon is associated with
the serpent symbolizes the evil that is overcome by Christ. The dragons
are part of the army of Lucifer, as opposed to the angels of God's
army.

In the extreme East, the dragon has a double symbolism, since it is both
air and land belonging to the underground world of caves and caverns,
or flying in the skies, riding the immortals. The dragon is in the
East, an active ingredient that meets and resolves all these contrary
elements and has a great divine power involved in the creation of the
universe. As an attribute of power, is also the symbol of the emperor
in China and the kings of the Celts and the Hebrews. In Hindu
tradition, the dragon is associated with the element fire and the
creative principle that establishes the universe through an order and
an organization.

My main question is... Who is the Dragon?

Absolutely fantastic post. You really are good to have posting around here.

On my point of view the Dragon are Asetians.

Well it depends on the culture. Usually the dragon or serpent is a symbol for wisdom, power and immortality. It can also represents Chaos, both in the sense of destruction and transcendence. The "pre-cosmic" Chaos (the Duat for the Asetians) would be symbolized by the dragon Tiamat in the sumerian pantheon.

The dragon can also represent life, not in an organic, materialistic sense, but more in a energetic and divine perspective. In Tatra, Kundalini is represented as a snake or serpent, a symbol and aspect of Shakti / Parashakti

What do you mean by "who is the dragon"? In one sense, "the Dragon" would be every Luciferian or Satanist who oppose to the Demiurgic Law, if we are within a dualistic perspective, or to every magician whose goal is Transcendence and total freedom.

As a piece of advise, you should go beyond words and classification, as in the end reality is formless and nameless.

The Dragon can be symbolized as the ASetians themselves

So do you think that upon the writing of the Christian bible, they intended to secretly represent the Asetian kin as a powerful sleeping force, the theological Dragon, a magickal creature that should not be awoken?

Jona... Yes. I think the Asetians are the last part of bible - Apocalipse - Revelation.

Stalker wrote:Jona... Yes. I think the Asetians are the last part of bible - Apocalipse - Revelation.

So I presume the Scarlet (Violet?) Woman riding on the 7-headed Beast would be... ASET?

I would think so..

The Djehuty of the Serpent began in 2000 ... Looking at the dates you think the Prince of the Lineage of Viperines was born on these dates?

What do you think? I am interested in your opinion.

I think is impossible .
This means to reincarnate at every 12 years .

I did not know that at all, thanks for posting this info!

By the way, if anyone is interested, I found a website where you can look this info up for your birthdate:
http://www.astrologizeme.com/chinese_sign_us.php

ElizabethBathory wrote:I did not know that at all, thanks for posting this info!

You're welcome! There are many divination systems of Chinese origin, and one of them (the "Four Pillars" method) calculates the combination Element/Sign for any given year, month, day, and even hour! You can see it here, in 28 different languages:
http://www.fourpillars.net/calculator.php

Or you can download a free software that makes all those calculations and some others, here:
http://www.fourpillars.net/ftp/fourp1.exe (direct link to .EXE file)

in my experience its a reincarnation every 8 years and it surely is possible.....

A few years ago when I started experiencing an increase in synchronous events - events that started me on my quest to learn more about the spiritual realm - I stumbled across a book called the Destiny Matrix.  This was an excerpt from the book

“Jack you are Heir to the Tradition. You will not come into your power until you are with the woman and the child - You will smash the wall of light!". Carlo Saures.” (1892-1976) to Jack Sarfatti Christmas 1973 Paris. Was Saures a member of The Priory of Sion ?

The phrase Woman of the Apocalypse refers to a character from the Book of Revelation 12:1-18:[2]
1 And a great sign appeared in heaven: A woman clothed with the sun, and the moon under her feet, and on her head a crown of twelve stars. 2 And being with child, she cried travailing in birth: and was in pain to be delivered. 3 And there was seen another sign in heaven. And behold a great red dragon, having seven heads and ten horns and on his heads seven diadems. 4 And his tail drew the third part of the stars of heaven and cast them to the earth. And the dragon stood before the woman who was ready to be delivered: that, when she should be delivered, he might devour her son. 5 And she brought forth a man child, who was to rule all nations with an iron rod

The Einstein barrier for the motion of matter is called / known as the wall of light.

Is Luis Marques one of the Great Serpents? One of the last Dragons?

He seems to be the higher initiator and chosen teacher by the Aset Ka to enlighten us on the ancient mysteries in this era. That is no simple task.

Additionally, he does that without any care or consideration for fame and human recognition, which is a mark of the masters from higher realms.

And just for the record the focus in my previous post was not on the identity of certain individuals it was purely for the " deeper meaning / content " pertaining to their conversation.  I was focusing more on the possibility of a cataclysmic event ? Possibly scientific in nature ? The woman and male child will perhaps represent the next stage in the evolution of the human race as a consequence of the cataclysm ? And maybe my intuition was totally off track at the time of the revelation ? Who's to say

I know that was not your intention. My post was unrelated with what you just wrote, but your post made me revisit this thread and connect different pieces alongside my own observations that led me to expose such question or theory. For the record I don't wish to explore or expose the identity of anyone, I just think that understanding the role or manifestation of certain key individuals in history can shed light on important details and lessons. I also want to add that it's my understanding that these key personalities from higher realms wield the power to shape the fate of many. I believe this to be one of those cases.

An excerpt from the emerald tablets (mistranslation might be here but I can't read ancient languages so bear with me):

In the form of man they amongst us,
but only to sight were they as are men.
Serpent-headed when the glamour was lifted
but appearing to man as men among men.
Crept they into the Councils,
taking forms that were like unto men.
Slaying by their arts
the chiefs of the kingdoms,
taking their form and ruling o'er man.
Only by magic could they be discovered.
Only by sound could their faces be seen.
Sought they from the Kingdom of shadows
to destroy man and rule in his place.

Kalb, you might consider looking at the book of Revelation, which has 22 chapters, as corresponding to the 22 Major Arcana.  That was the way that book was written...to connect to it that way.  One can look at the Zodiac structure to find the 12 apostles, etc....the tarot will open up the hidden secrets of the bible if you see the connection to it along with the astro design.  Same can be found in the old testament. The study of the stars is the ancient connection to the Sun (Son) while the study of the tarot is the connection to the moon.. They compliment each other. Sun is Male Moon is female.

Similar topics
» What is a serpent?
» The Djehuty of the Serpent
» Mehen, the serpent of Re
» Serpent lineage, specific characteristics
» Luis Marques, the Asetian Serpent.